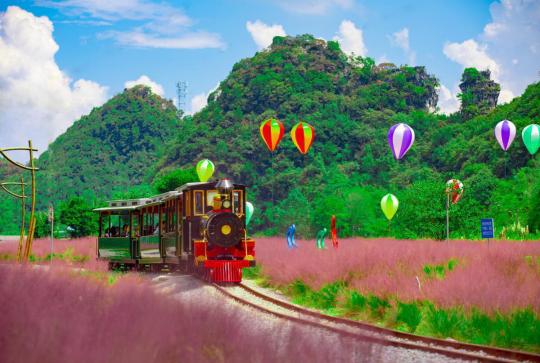 A train operates in a sea of ornamental pink muhly grass ( Muhlenbergia capillaris) in Changshun county of Guizhou province. (Photo/chinadaily.com.cn)

Bookings for airline tickets, hotels and tour packages for the seven-day break have been rising as the holiday has gotten closer.

Travel portal Fliggy said reservations for airline tickets, hotels and long-distance tours have all doubled in the past week.

Beijing is topping travelers' wish lists for the break thanks to the opening of Universal Beijing Resort, Fliggy said, with other popular attractions in the capital including the Summer Palace and the Great Wall.

Figures given by Lvmama, another travel agency, highlight the popularity of Universal Beijing Resort. It said that in the past week, bookings for airline tickets bound for Beijing on its platform have risen continuously and reservations for hotels in the city have increased by 330 percent.

Zou Qingling, CEO of Lvmama, said that prices for trips during the holiday have fallen slightly. Giving Sanya, a popular seaside destination, as an example, she said tour prices were down by 5 percent to 20 percent compared with 2019.

"It's quite economical," she said. "Allowing for concerns about sporadic COVID-19 outbreaks, travelers prefer self-driving tours with their family members and smaller group tours."

Travel agencies said trips will begin to surge from Thursday and peak on Friday, the first day of the holiday.

Tuniu, another online travel agency, said that over 70 percent of its users will spend at least three days traveling and sightseeing over the holiday and around 20 percent of users have booked tour products for family trips.

It said that people aged 26 to 35 make up the biggest group of holiday travelers making bookings on its platform. Women accounted for 57 percent of tour package bookings, it said.

Lian Yiming, a 34-year-old lawyer from Beijing, said he plans to take his wife and their 5-year-old daughter to his hometown of Dunhuang, Gansu province, during the holiday.

"To avoid the travel peak, we plan to start the trip on Saturday and return to Beijing on Oct 9, two days after the holiday ends," he said.

"Gansu is very beautiful and I want to show my little daughter the marvelous landscape there. We get few long breaks like the National Day holiday, so it's quite a chance to take them to travel and visit my parents there."

Most popular in 24h

LINE
Media partners: People's Daily | Xinhua | CGTN | China Daily
Back to top About Us | Jobs | Contact Us | Privacy Policy
Copyright ©1999-2021 Chinanews.com. All rights reserved.
Reproduction in whole or in part without permission is prohibited.
[網上傳播視聽節目許可證（0106168)] [京ICP證040655號]
[